Skip to content
Do you know I have never tried a rice krispie treat until this past year? I have lived in the US for over ten years now, and from all the other amazing things, it never even occurred to me to try one. I think I imagined them like those diet rice crackers or something, but way too sweet. Sweet they are, but oh so delicious. Once I tried one I had four in the same night and I couldn't stop myself, I wanted to hit myself on the head for missing out for so long.
I know not everyone loves them this much, but I didn't only feel like I missed out on them for ten years, I felt like I was robbed my whole childhood, haha.
Anyway, I've made a krispie treat twice now, the first one was from the recipe I got at the party where I first tried them and they disappeared before I could take photos, oops. This one I made for another party and while there was some room for visual improvement, boy were they good! What is there not to love, peanut butter layer, melted marshmallows and butterscotch rice krispie treat on top? Awesomeness.
The following recipe I found on the table for two blog, I didn't change a thing and it was delicious!
Butterscotch Krispy Bars
by table for two
1 14.5 package of pre-made peanut butter cookie dough
1 10 ounce bag of miniature marshmallows
1 11 ounce bag of butterscotch chips
4 tbsp. unsalted butter
⅔ cup corn syrup
1 tbsp. vanilla extract
5 cups rice cereal
Preheat oven to whatever temperature the cookie dough package says.
Line a 11x7 baking dish with parchment paper with 2-inch overhangs on either side.
Press the cookie dough into the bottom of the baking dish in an even layer.
Bake for however long the cookie dough package says.
When the cookie layer is done baking, immediately pour bag of marshmallows on top of the cookie layer then put back in the oven for 5-7 minutes, until the marshmallows soften and become slightly melted (this could be less than 5-7 minutes). Remove from oven and set aside.
In the meantime, in a large, non-stick pot over medium high heat, melt butterscotch chips, butter, corn syrup, and vanilla extract together. Once the butterscotch chips have all melted and the mixture is smooth, turn off the heat and stir in the rice cereal. Stir until rice cereal is completely and evenly coated with the butterscotch mixture.
Place the butterscotch rice krispy layer evenly on top of the marshmallow layer and gently press down to flatten. You'll probably have to do this in parts as the rice krispy layer doesn't "spread."
Let cool for at least 6 hours or overnight.
Slice into squares and serve.
recipe in its entirety from table for two 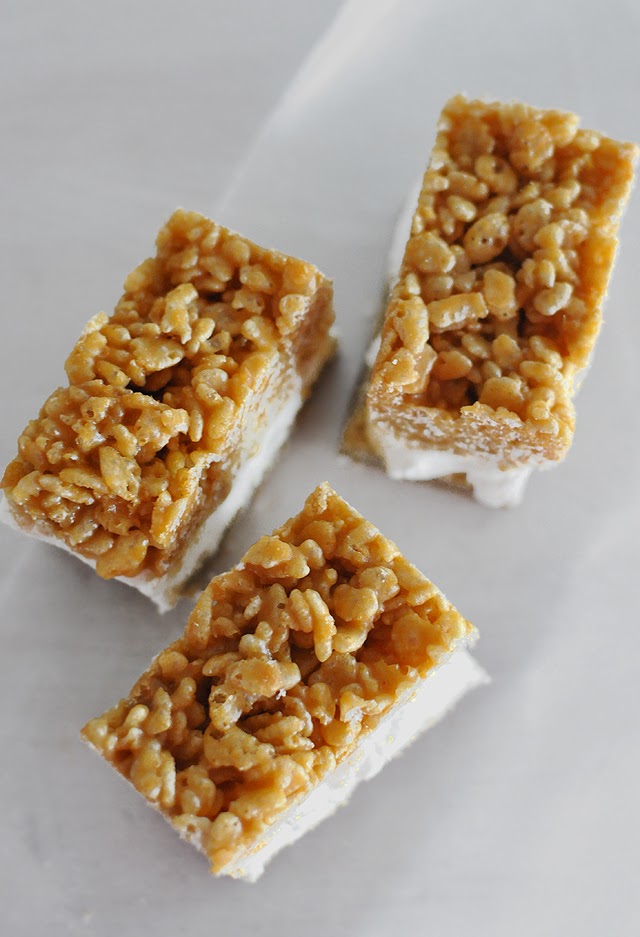 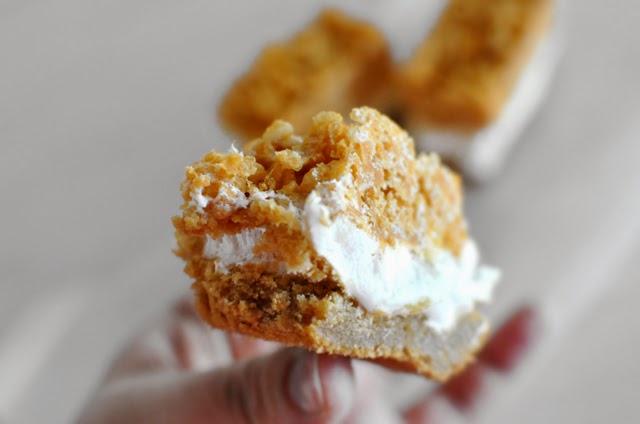