This leek and potato soup with fried ground meat patties is funnily one of my favorite childhood meals. Why funnily? Well this is a classic dish in Croatia, lovingly called peasant food. Also known as best food in the world if you ask me. But not many kids love it. I’d actually say that most kids dreaded Poriluk day, poriluk is our name for leeks and we simply call this soup poriluk. My brother wouldn’t touch this soup with a stick when we were little, and it was my fave. Now he loves it too! It varies from household to household how you make it, some people prefer to cook it with sausage, and some people make these fried ground beef patties on the side that we call Faširanci. My mom and grandma did it both ways, but I will always choose the patties if I can. Another thing a lot of people use in Croatia in general is Vegeta seasoning, it has a very specific taste but I like using vegetable or chicken broth better, than seasoning it up myself.

So what is in it?

I start my leek and potato soup with some thick bacon slices cut into one inch pieces. When they are nicely browned I add the leeks and saute for a bit, before adding the broth, potatoes and rest of the ingredients. As for the fried beef patties, I use both pork and beef and I  saute some diced onions and garlic, add some stale bread soaked in milk and an egg. Add a few seasonings, shape them into patties, roll in bread crumbs than I quickly pan fry them. They are so good and incredible with almost any kind of veggie soup! They would go great with this simple chickpea soup. 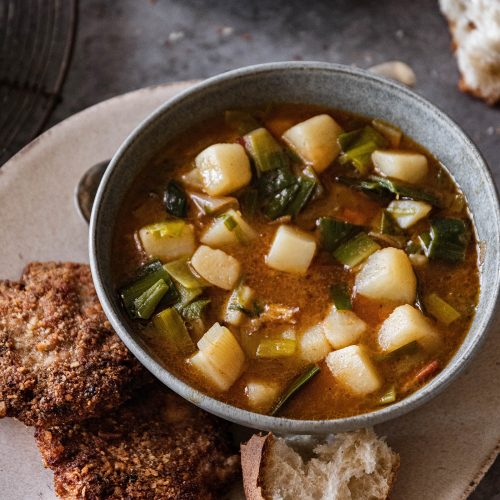 To make the soup

For the Fried Meat Patties