So about this BBQ Mac and Cheese Pie. There is this local to Utah company Crust Club that I’ve occasionally been ordering food from in the past year. I like many of their dinners and pies, but by far and wide, our favorite is their BBQ Mac and Cheese Pie. My husband also likes their tamale pie, we loved their turkey dinner pie during the holidays as well! I’ve told many friends and family about them and they all loved everything they ordered. Ooh, they also have baby pies, our favorite so far is pumpkin pie and Tres Leches. Seriously, if you are local to Utah and in their delivery area you should try them out. They even have cookies, so something for everyone. Unfortunately, shipping nationwide is not as simple as it sounds and they had to stop that service, so I have a lot of sad friends out of state. They are as addicted to BBQ Mac and Cheese Pie as I am. I think Crust Club is working on expanding their locations so there is hope. In the mean time, I tried recreating this family favorite.

What is all the fuss about?

Well. it is just the coziest and tastiest dish! I don’t know how they thought it up, but the BBQ meat combination with creamy mac and cheese, all wrapped in flaky pie crust. I mean what is there not to love?!? Their pie lasts the four of us for two dinners. My pie was even bigger than theirs and in an extra deep dish and this pie fed us for days and days. It just gets better, the flavors develop more and my boys literally keep asking when we are having BBQ Mac and Cheese pie again. They are good with me ordering or making it, and that is a huge success in my book. Because the original is truly delicious! Funnily for how much I love it, I don’t have a classic mac and cheese on my blog yet, but I do have this Beer and Bacon Mac and Cheese and it’s excellent! 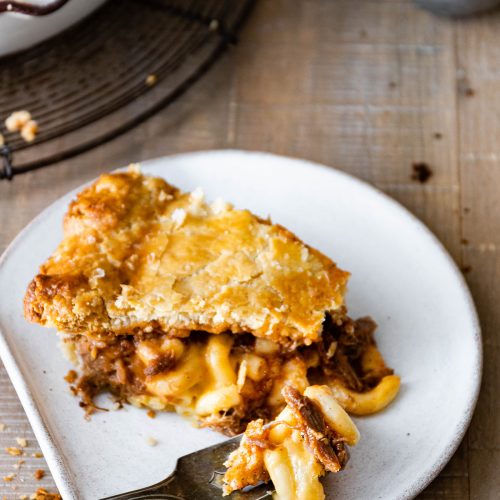 For the pie crust:

For the Mac and Cheese:

For the pie crust:

For the mac and cheese: